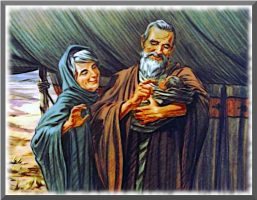 1. The introduction of Abraham – Genesis 11:26-32
2. God asks Abram to leave his father’s house in Ur – Genesis 12:1-5
3. God appears to Abram in the land of Canaan saying this land will be given to his seed – Genesis 12:6-7
4. Abram builds a altar to God in a place east of Bethel – Genesis 12:8
5. Abram and Sarai’s Egypt experience with Pharaoh – Genesis 12:9-20, Genesis 13:1
6. The strife between Abram’s and Lot’s herdmen and the division of the land between Lot & Abram – Genesis 13:1-13
7. God tells Abram the land that he sees on all sides will be given to him – Genesis 13:14-18
8. The war of the kings, the rescue of Lot who was taken captive by the kings by Abram and Melchizedek the high priest blessing Abram – Genesis 14:1-24
9. The LORD appearing in a vision to Abram and saying that the one that comes out of Abram’s own bowels will be his heir. The LORD also tells him that his seed will be a stranger in a land not their own and will be afflicted for four hundred years – Genesis 15:1-21
10. Abram lies with Hagar, Sarai’s maid on his wife Sarai’s behest – Genesis 16:1-6
11. Abram’s age when his son Ishmael was born – Genesis 16:15-16
12. God appears to Abram, renames him to Abraham, establishes a covenant with him, introduces circumcision, renames Sarai to Sarah and tells that Sarah will bear a son who will be named as Isaac and God establishes his everlasting covenant with Isaac and his seed – Genesis 17:1-22
13. Abraham circumcises all his household, Ishmael and himself – Genesis 17:23-27
14. The LORD and two angels appear as three men to Abraham who on seeing them proceeds to invite them to rest and have some food to eat. The LORD tells that he would return according to the time of life and Sarah will have a son – Genesis 18:1-16
15. The LORD reveals to Abraham that he is going to destroy Sodom and Gomorrah because their sin is grievous and Abraham intreats God to spare the cities if there were a few righteous men within them – Genesis 18:16-33
16. Abraham sees the smoke coming up from the destroyed cities of Sodom and Gomorrah – Genesis 19:27-29
17. Abraham and Sarah’s Gerar experience with king Abimelech – Genesis 20:1-18
18. Isaac is born to Abraham & Sarah, his circumcision – Genesis 21:1-8
19. God tells Abraham to listen to Sarah to send away Ishmael and Hagar and that he would make a nation of Ishmael too because he is Abraham’s seed – Genesis 21:9-14
20. Abraham and Abimelech make a covenant – Genesis 21:22-34
21. God asks Abraham to offer his son Isaac as a burnt offering and Abraham obeys. The Lord sees that Abraham does not hesitate to offer up his only son Isaac as a burnt offering, God provides for a ram instead to be offered in place of Isaac. He goes on to bless Abraham saying that his seed will be multiplied as the sand of the sea and of the stars of heaven and in his seed will all the nations of the earth be blessed – Genesis 22:1-19
22. Abraham is informed of his brother Nahor’s children through his wife Milcah and concubine Reumah – Genesis 22:20-24
23. Sarah passes away, Abraham buys the cave of Machpelah to serve as a burying place from Ephron the Hittite who dwelt among the children of Heth – Genesis 23:1-20
24. Abraham is well stricken in age, he takes an oath from his oldest servant to find a wife for his son Isaac from his native country and from his kindred and will not take a wife from the daughters of Canaan – Genesis 24:1-10
25. Abraham takes another wife Keturah, bares more childre, gives all his wealth to Isaac his son and sends his other children away with gifts, Abraham dies and his sons Isaac and Ishmael bury him in the cave of Machpelah where Sarah was also buried – Genesis 25:1-10